I want to share a story with LEAF blog readers. It’s the story of how two relaxed keeners planted a native butterfly garden, repurposed downtown grown trees (cleared for development) into seating and planted the next generation of canopy at our local library. It’s the story of seizing the potential of a lawn and creating a shady outdoor reading room.

Some context: LeeAnne MacGregor and I both lived in the center east downtown, are bike riders, library users and urban nature nerds.  On the way to the Parliament Street Public Library for more books we got talking about the lawn that surrounded the branch.  Mostly grass with a spattering of honey locus and a Norway maple, there was huge potential to re-imagine the space.

After an inspiring chat with Amanda Gomm, Manager of Volunteer and Community Engagement at LEAF, we talked with the head librarian of the branch and Pam McConnell our local councillor.  To be eligible to receive a grant we formed a community group, the Ward 28 Common Space Committee (next time I start one, shorter name with a better pun!) and we applied for a City of Toronto neighbourhood beautification grant.  Nine months later, almost past the point of hope, a check came in the mail.

We started holding monthly community consultations, held meetings with the local neighbourhood associations and groups already working in the area.

Pretty soon our proposed park was adapting to the wants and views of the community we were hoping it would serve.  Our benches became a multi use seating and climbing structure, food crops were replaced with native perennials and one tree was taken out of the plans for its future effect on light in the library.

Our site at the corner of Gerrard and Parliament is across from to Regent Park.  With a hope to cut down on our energy use and materials cost we began exploring the reuse of bricks and logs from the areas being cleared for redevelopment.  The TCHC (Toronto community Housing Corporation) was great and although not able to offer bricks, were generous with their logs.

We were fortunate to receive 40 to 50 year old honey locus and little leaf linden logs; LEAF helped us move them to the site and local artist Harley Valentine transformed into a seating and climbing structure.  The form honours the logs while meeting the design specification put forward by the community.  I invite you to try it out, it’s quite comfy to curl into and read your latest library material.

With a team of community volunteers we cleared the sod, amended the soil with compost, planted several native shrubs, many perennials, a white oak and pagoda dogwood.  The area was mulched and a sign added.

We set up a stewardship group to ensure that watering would be carried out until the plants and trees were established. 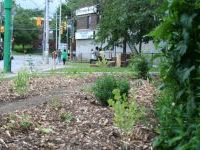 It took some dedication and persistence but it was a project that we could all do with a vision and some extra time. And that’s the story of the Parliament Library Gardens.  A small project for us but a large leap forward for the lawn.